Coming soon... ink you can eat!

Coming soon... inks you can eat, or also referred to as edible inks.  Why on earth would you want to eat your inks?  Well, for printing digital images onto your cakes! For example, you will be able to print that photo of your son or daughter to put onto their birthday cake.  Personalize cakes, cupcakes, or other baked goodies by simply printing your desired image onto a sheet of edible paper (yes, you can eat the paper too which are also known as frosting sheets), and apply the printed frosting sheet to your cake.  All this, on a simple sub $100 inkjet printer!

We have been working long and hard to test and bring to market a comprehensive solution for edible inks and edible paper (frosting sheets) and will be releasing it soon.

You will be able to print your cakes and eat them too!

Questions? Comments? Please post and we will be happy to respond.
Posted by Author at 9:48 AM 1 comment:

Glossy Optimizer Inks available in easy to use sizes Glossy optimizer inks are used in select printer cartridges, such as cartridges for Epson R800 / R1800 / R1900 and Kodak #10 cartridges.
Posted by Author at 9:41 PM No comments:

Poll favors Lexmark as the "least friendly for refills" printer

123 Refills has been conducting a casual poll on its blog asking 2 versions of essentially the same question:

With around 100 votes in so far, there is an interesting picture that is being painted by voters.

Lexmark is clearly in the lead as the "least refill friendly" printer, with 35% of respondents choosing that brand over any other.  This is not surprising given the high failure rate of Lexmark original ink cartridges (most in the aftermarket industry would agree that the quality of Lexmark cartridges is inferior to other brands - the print heads clog frequently, they wear out faster than other brands among other technical problems).  The voting is also not surprising given 2 other well publicized tactics by Lexmark:


So its not surprising that Lexmark is being selected as the "least refill friendly printer".  Dell cartridges are made by Lexmark, and Dell is the 3rd least popular for refills in the same poll.  What is interesting though, is that HP is currently in 2nd place as the least refill friendly printer, yet, it is also currently in 2nd place as the "most" refill friendly printer.  Lets analyze this for a moment... how can a printer brand be both highly popular for refills, and highly unpopular at the same time?
Our take on this is that HP has flip-flopped over the years, putting out refill friendly printer cartridges, and refill unfriendly cartridges as well.  So customers who have bought the refill friendly cartridges, are happy with HP, and customers who bought the unfriendly for refills cartridges, are obviously unhappy with HP.  Some HP cartridges are easy to fill.  For example, the HP 94, HP 95, and other HP 90 series.  But other HP cartridges like the HP 940, HP 920 and HP 564, are not as friendly because they have chips!  A customer who bought an HP 94, would probably consider HP a refill friendly brand.  But a customer who bought the HP 920, would consider it refill unfriendly.  It would server HP well to continue down the path of being refill friendly.  Yes, they will lose some market share to the aftermarket, but the aftermarket will promote their brand and HP will benefit as well.
That's our short analysis on the poll results so far.  Please vote and let us know what you think! The poll is open to anyone and is visible to the right of the page.
Posted by Author at 11:02 PM No comments:

93% of voters say that OEM cartridges are overpriced

123 Refills has been conducting a poll of casual internet users to see what they think of OEM (original brand) cartridges - are they overpriced? Or do they offer value for money?

With the various marketing spins out there, one would think that consumers opinion could be easily affected.  HP has invested a good sum to promote its "ink amnesty" marketing campaign, for example, whereby it claims that 3rd party ink suppliers offer inferior products.  They have also commissioned a "study" to prove that OEM HP ink and toner is better value than remanufactured ink or toner supplies. Lexmark commissioned a similar study a couple of years ago incidentally, which (probably embarrassingly to Lexmark) found that original Lexmark inks fail a significant percent of the time!

Without digressing too much, lets zero in on what consumers really think. Now, agreed, our study is not a scientific one, and could be skewed by the visitors that land on our blog site (including our customers), and the number of voters is around 60 currently (which allows for a higher margin of error), however the results are trending quite clearly... over 90% of respondents are saying that OEM cartridges are overpriced.  It is also important to note that our website offers OEM cartridges for sale alongside remanufactured cartridges, and we do sell a lot of OEM cartridges, so our users are not necessarily biased towards "only" remanufactured cartridges.

What do you think? Vote to the right of the page and let everyone know what you think... are OEM cartridges overpriced? Or do they offer value for money?
Posted by Author at 10:44 PM No comments:

Ever had a hard time finding supplies for your printer model? Printer nomenclature can be confusing, there are literally tens of thousands of printer and / or cartridge models on the market, and identifying the specific model for your printer may not be as simple as many people think.  Take HP for example, with its hundreds (or thousands) of different models. Is it enough to know that you have an HP 5740 (for instance)? Not exactly, as it turns out there is an HP Deskjet 5740 and an HP OfficeJet J5740.  There is also an HP Deskjet 5740xi, but that one takes the same ink supplies as the HP Deskjet 5740 which is as follows:

The HP OfficeJet J5740 on the other hand takes a different set of inks, as follows:


123 Refills has now made it easier to find the ink or toner supplies you need by introducing filters by printer series.  Simply select your printer model from the left menu (like HP) and you will be brought to a landing page which offers all printer and cartridge models for HP, specifically: http://123refills.net/cic/eg/printers.php?printer=HP.  On this page you will notice the filter for "Printer Series", allowing you to specifically navigate by printer series such as:


Thereby allowing you to hone in to the subset of printer models that will help you find exactly what you need quickly and accurately.


Need further assistance? Don't hesitate to call our friendly customer service staff from 6am to 5pm PST, Monday through Friday. CALL 866-465-5888
Posted by Author at 10:24 PM No comments:

If you own a Canon printer that uses the PGI220 or CLI221 ink cartridges (PGI-220 / CLI-221 series), you know that the cost of new replacement inks is over $15 per cartridge if you buy original brand ink cartridges from an office supply store such as Office Depot.  Refilling them is smart and easy to do with Uni-Kit inkjet refill kits.

Here's how you can get approximately 56 refills for the price of only $39.99 (hint, sign up for our monthly newsletter and get additional discounts).  A resetter (sold for $19.99) or replacement chips (sold for $1.99) are also required.  The resetter is reusable and will yield hundreds of resets.


And that's it!
Now for a closer look at the instructions, we've included them here for you courtesy (and with intellectual property credit to Uni-Kit).  Note there are 2 methods, choose whichever one sounds easier to you:
METHOD 1: 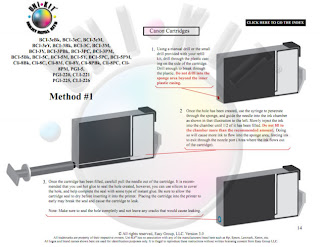 1. Using a manual drill or the small drill provided with your refill kit, drill through the plastic casing on the side of the cartridge (see image for location). Drill enough to break through the plastic. Do not drill into the sponge area beyond the inner plastic casing.
2. Once the hole has been created, use the syringe to penetrate through the sponge, and guide the needle into the ink chamber  as shown in the illustration to the left. Slowly inject the ink into the chamber until 1/2 of it has been filled. Do not fill to the chamber more than the recommended amount.  Doing so will cause more ink to flow into the sponge area, forcing ink to exit through the nozzle port (Area where the ink flows out of the cartridge).
3. Once the cartridge has been filled, carefully pull the needle out of the cartridge. It is recommended that you use hot glue to seal the hole created, however, you can use silicon to cover the hole, and help complete the seal with some type of instant glue. Be sure to allow the cartridge seal to dry before inserting it into the printer.  Placing the cartridge into the printer to early may break the seal and cause the cartridge to leak.
Note: Make sure to seal the hole completely and not leave any cracks that would cause leaking
METHOD 2: 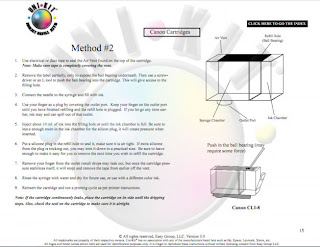 1. Use electrical or duct tape to seal the Air Vent found on the top of the cartridge.
Note: Make sure tape is completely covering the vent.
2. Remove the label partially, only to expose the ball bearing underneath. Then use a screwdriver or an L tool to push the ball bearing into the cartridge. This will give access to the
filling hole.
3. Connect the needle to the syringe and fill with ink.
4. Use your finger as a plug by covering the outlet port.  Keep your finger on the outlet port
until you have finished refilling and the refill hole is plugged.  If you let go any time earlier, ink may and can spill out of that outlet.
5. Inject about 10 ml. of ink into the filling hole or until the ink chamber is full. Be sure to
leave enough room in the ink chamber for the silicon plug, it will create pressure when
inserted.
6. Put a silicone plug in the refill hole to seal it, make sure it is air tight.  If extra silicone
from the plug is sticking out, you may trim it down to a practical size.  Be sure to leave
enough to make it easy for you to remove the next time you wish to refill the cartridge.
7. Remove your finger from the outlet (small drops may leak out, but once the cartridge pressure stabilizes itself, it will stop) and remove the tape from earlier off the vent.
8. Rinse the syringe with water and dry for future use, or use with a different color ink.
9. Reinsert the cartridge and run a priming cycle as per printer instructions.
Note: If the cartridge continuously leaks, place the cartridge on its side until the dripping
stops. Also, check the seal on the cartridge to make sure it is airtight
Posted by Author at 1:05 PM 1 comment:

What motivates your decision to buy a new printer?

What do you think of original brand cartridges (OEM cartridges)?

Which is the most refill friendly printer?

Which is the least refill friendly printer?

Promote Your Page Too